How Not to Scare Customers Away with a Bad Review Response October is the month of tricks, treats and all things spooky. But do you know one thing that shouldn’t be scary — even on Halloween? Your responses to customer reviews!

Sure, it can be easy to get spooked by the occasional negative review. But the way you respond to a negative review (or don’t) plays a huge role in how much of an impact it’ll have on your business.

A great response to a negative review can turn a bad situation around and win you a lifelong customer. And a bad response can frighten away even your most loyal shoppers.

5 Types of Scary Review Responses — And What to Do Instead

In honor of Halloween, we’re sharing some of the most hair-raising review responses we’ve seen recently — with tips for how you should respond in similar circumstances.

Sure, a robot might be a fun Halloween costume. But in some instances, your shoppers might think a robot is responding to their reviews. And that’s no fun.

This customer wrote a three-star review for a restaurant called Volare, indicating it was “not worth the drive.” The restaurant responded by saying, “Thank you for reviewing Volare. Hope you can come again soon.”

This is a pretty generic response that doesn’t address any of the points in the review. Plus, let’s be real: the reviewer probably won’t be back, judging by the fact that they indicated it wasn’t worth the drive. 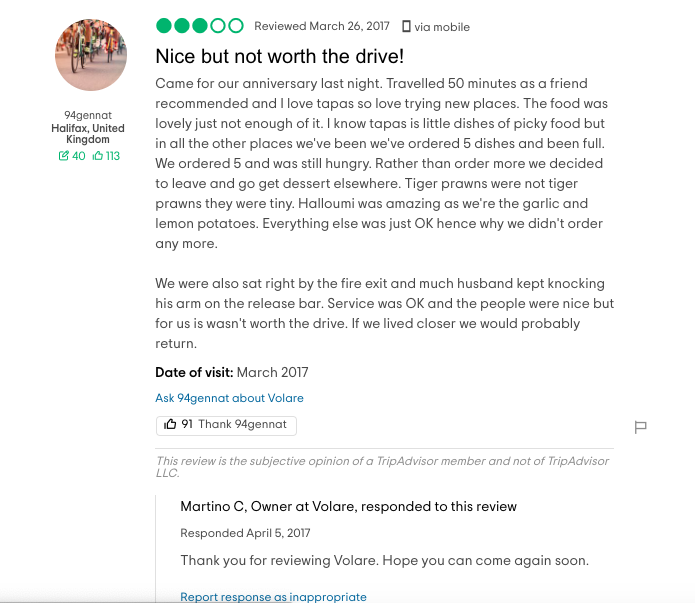 When we scroll through other reviews for the same restaurant, we see this is actually a larger problem. It appears the restaurant posts the exact same response to every single review.

How NOT to be a Robo-Responder

Your shoppers want to feel like an actual human is addressing their concerns. So when you post the same response to every single review, it comes across as inauthentic and robotic. That can be a huge turnoff for the reviewer, as well as future shoppers who will read the response. And research from BrightLocal tells us that 97% of consumers that read reviews also read businesses’ responses to reviews.

It’s great to provide your staff with review response templates that address the common themes you see in reviews. But remember: these templates aren’t meant to be copied and pasted as-is.

Instead, use review response templates as a starting point. If you’re a Reputation Studio customer, you can house these templates in one central location so it’s easy for your staff members to find. Then, personalize each response to fit the review. Your response should address the customer by name and address specific issues raised in the review.

You work hard to deliver products and services your shoppers love. So when you get a negative review, it’s easy to get defensive. This is especially true when the review is inaccurate -- or the negative experience was the fault of the reviewer.

It may be tempting to set the record straight by placing the blame on the reviewer. But doing so can come off as aggressive -- and scare off future shoppers.

This patient wrote a negative review for a doctor’s office, indicating the receptionist called her a liar. The office posted a lengthy response denying that the reviewer was called a liar. They also explained, in great detail, that the reviewer’s poor experience with their office was actually her own fault. 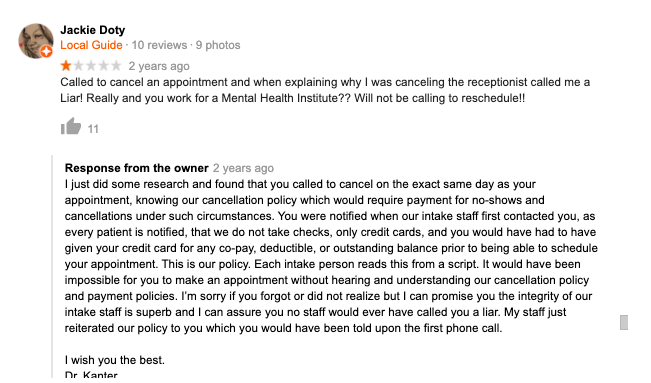 Here’s another example. This shopper left a one-star review for a florist, stating that the company’s website is “horrible garbage.” It appears the shopper ran into problems when attempting to place an online order.

The owner gets defensive right from the start, stating that “My website is awesome and never has had an issue for over 5 years…” She then blames the shopper for their poor experience saying, “You must be putting a zip code we don’t deliver to. You could have called us.” 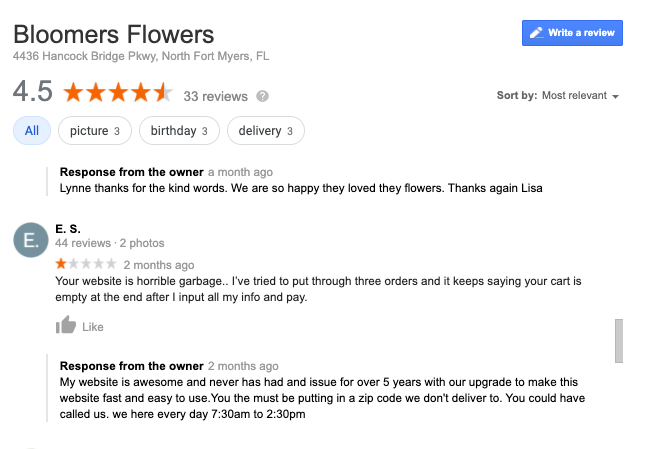 Let’s take a look at one more scary response from a “finger pointer.” This patient wrote a one star review for a dentist’s office. Based on the review, she had a pretty traumatic experience and says she left the office crying and “feeling bullied.”

The business owner did offer an apology, so we’ll give him credit for that. But he also lets the patient know he believes her bad experience was actually her own fault. He says “...it speaks volumes when...Dr. Kim has chosen to not perform surgery on just 1 patient.” We can only assume this “one patient” is the reviewer. And it’s implied that the reason the dentist chose not to perform surgery is because the reviewer was a problematic patient. 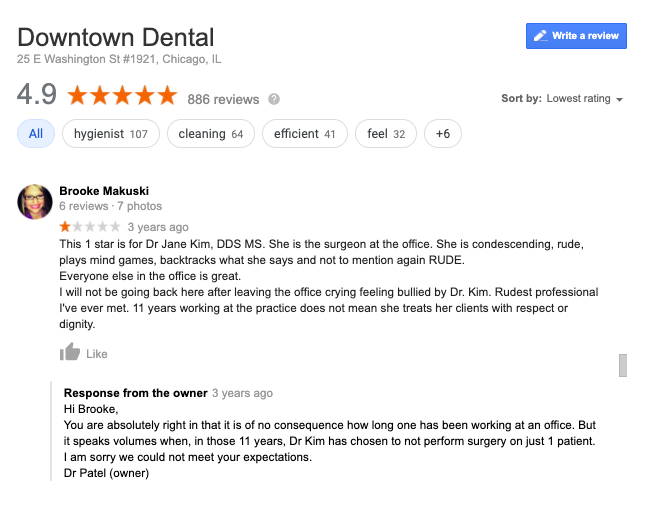 How NOT to be a Finger Pointer

We get it. It’s hard not to get defensive when you get a negative review -- especially when the details of the review aren’t true. But an aggressive response will not only scare away the original reviewer -- it’ll also spook future shoppers.

Do your best to keep your cool. Offer an apology for the reviewer’s poor experience, and give them an opportunity to connect with you offline to provide more details so you can resolve their issue. And remember: if the reviewer is being unreasonable, future shoppers reading the review will be able to read into that.

The name caller is (fortunately) a rare breed. But they do exist.

As you’ve probably figured out, these are the businesses that resort to name calling when they receive an unsavory review. Let’s take a look at an example of the name caller in action.

Jean P wrote a one star review for a restaurant. Jean details her bad experience, focusing on a rude employee. The business responded by calling Jean “cheap” and a “liar.” Ouch! 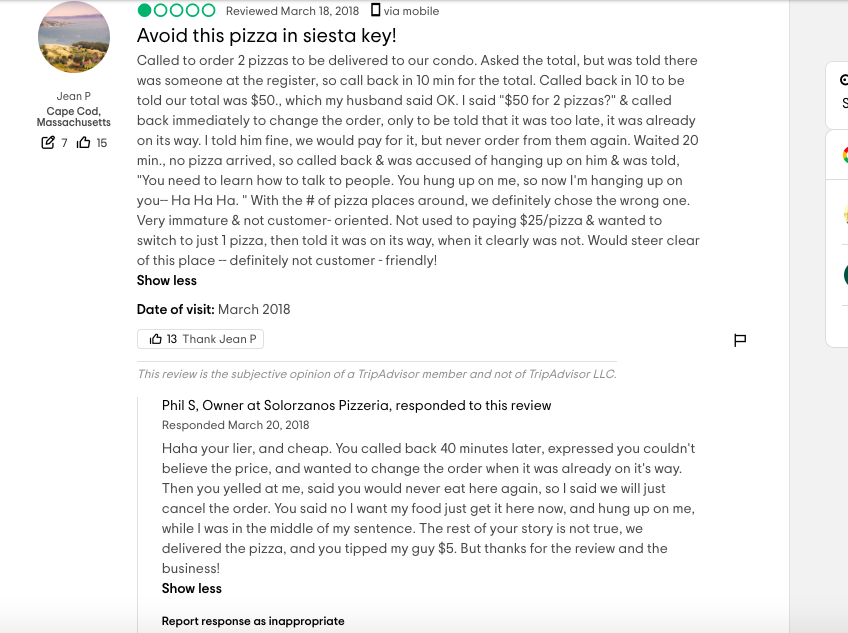 Let’s take a look at another example. This parent wrote a one star review for his child’s dentist, detailing a particularly bad experience at the office that left him feeling like the dentist wasn’t trustworthy. 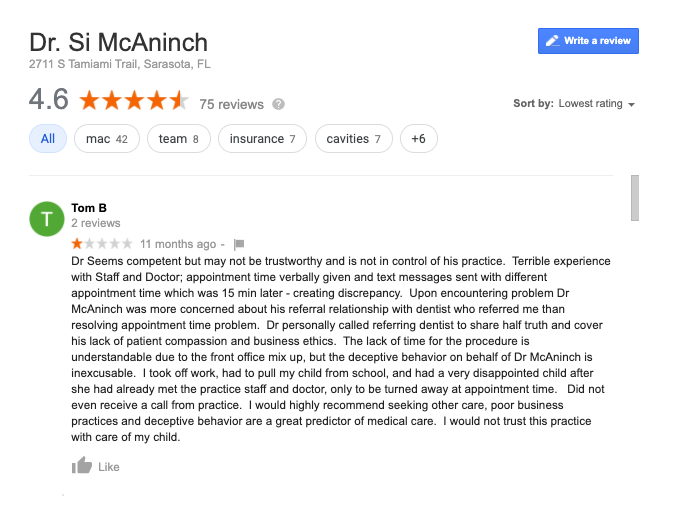 The owner starts off by thanking Tom for his review, but then things quickly go south. The culmination of the response is when the owner calls Tom a bully. 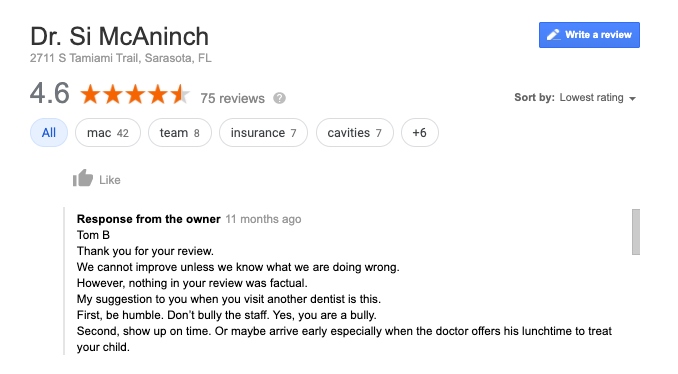 How NOT to be a Name Caller

It’s no fun to get a bad review. But no matter what, avoid name calling. It’s juvenile and it makes your business look bad.

Instead, keep a cool head. Apologize for the reviewer’s bad experience, and offer to take things offline to discuss further.

Remember: future shoppers can tell if a reviewer is being unreasonable. If you take the high road, those shoppers are more likely to overlook the negative review and make a purchase from your business.

You might get a ton of great reviews about a product or experience. And then, out of left field, you get a bad one.

Deniers dismiss the feedback and concerns addressed in negative reviews as invalid.

For example, this traveler wrote a two star review for a walking tour, indicating the experience was “a disappointment.” The business wrote a lengthy response saying they were “quite surprised” with her feedback, as the tour is always very well received. 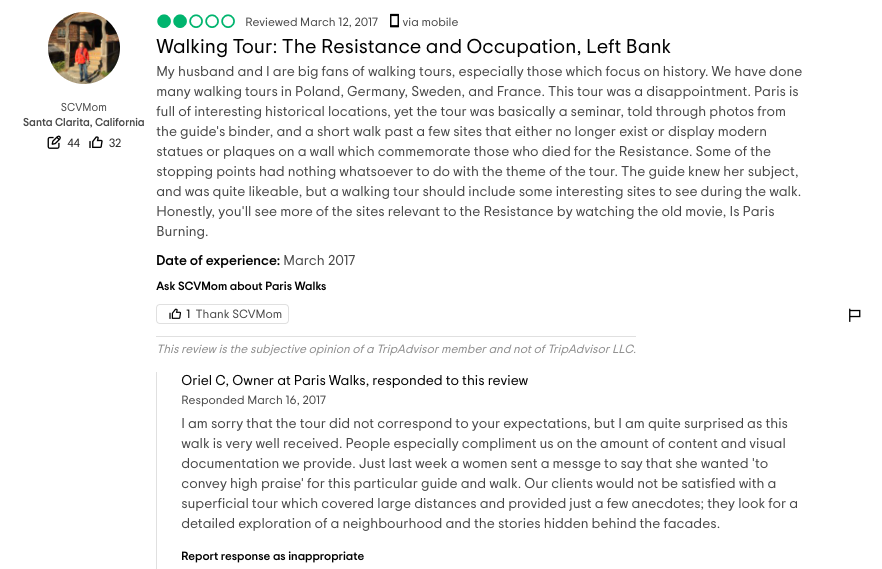 Here’s another example. This reviewer wrote a one star review for a bakery, indicating he would “never order from here again.” The business responded saying they’re “sure there must be some sort of misunderstanding…” as they were unaware of Paul’s dissatisfaction. They even suggested he wrote the review for the wrong bakery, as they “usually have very satisfied customers.”

How NOT to be a Denier

You can’t be all things to all people at all times. Even if you have a winning product that typically gets great reviews, you’re occasionally going to have some unhappy customers. It’s just a fact of life.

When you get negative reviews, apologize for the shopper’s bad experience. Then, address their complaints, rather than denying that they are legitimate. If needed, take things offline to get more details about the shopper’s experience so you can help resolve their issues. Their negative feedback might even give you ideas for making your product or experience even better!

The ghost is probably one of the most common scary responders out there. These are the businesses that straight up ignore negative reviews.

For example, this reviewer, Mauzzz, wrote a one-star review for a skincare product. In fact, she called the product the “WORST serum ever” and detailed how it’s sticky and didn’t deliver the results she expected.

How NOT to be a Ghost

Responding to your reviews -- especially the negative ones -- is critical. A great response can help turn a negative situation around -- and win you a loyal shopper. For example, if the health and beauty brand in the example above responded to their shopper, they could let her know she’s welcome to return her unwanted product. They could also offer to help her find a product that better fits her needs.

When it comes to review responses, time is of the essence. If you’re a Reputation Studio customer, you can see and respond to all of your reviews, regardless of where they were written. You can also set alerts so reviews that fall below a certain star level or include specific keywords are immediately escalated for quick resolution.

Don’t Spook Your Shoppers with a Scary Review Response

Reviews are a great opportunity to engage with your shoppers. But the wrong response (or none at all) can be spine-chilling for your shoppers. For more tips on responding to negative reviews, check out this blog.